Or “How I spent my New Years Day”

FIrst off, a huge thanks to Carlos Elias Llop for introducing me to the use of cork as a construction material.

I used an inexpensive injection molded photo frame as a base pedestal and cut a piece of styrene scrap to fit on top of it comfortably. A quick layout was done using a Panzer 1 for a rough vehicle size (the intended resident of this base). A commercially available manhole cover and gutter drain were used and incorporated into the sketch layout. Alignment lines were added to aid in forming straight lines with the courses of pavers

The base plate was cut out of .060 styrene. Then it was scored on the top side at the location of the center of the street and again on the botom face of the plate along the line along the line where the the gutter and the curb meet. The base sheet was then bent to represent the crown in the street.

Cork bricks and pavers were cut. First, various thicknesses of cork sheets were sliced into strips. Then the strips were cut into sets of different lengths.. one length was used for all of the street pavers, one length for all of the sidewalk pavers, one length for all of the bricks in the wall etc… The cork bricks and pavers were glued one at a time into the base sheet, using the guidance lines to help keep them all roughly straight. Care was taken not to make them too perfect. Small gaps of varying widths were also incorporated to accept the spackle “grout” later. The manhole cover area and the gutter drain had to be treated with special care as these would be minor focal areas in the finished product. They may not be completely “accurate” but I feel that they are plausible and add a nice secondary level of detail. The pavers at the edge of the base plate were left to hang over the edge and trimmed after the whole base had been left to set up. A few of the very small corners of pavers chipped off and were reglued, trimmed and sanded flush. Where a more finished type of stone surface was desired (between the sidewalk and the brick wall and at the top of the wall) styrene extrusions were use. Small nicks and irregularities and wear in the stone were suggested by carving the corner of the styrene extrusions .

Once all of the pavers and bricks were glued down, the edges were sanded flush and spackle was spread over the whole surface with a small palet knife. Care was taken to force the spackle deep into all of the gaps and cracks. While the spackle was still damp a sponge was run over the entire base to wipe off most of the excess spackle. After that was done a brush was used to work the remaining spackle deeper into the gaps and also to lift some of it out, resulting in a three dimensional effect. The three-dimensionality will aid in the painting stage. 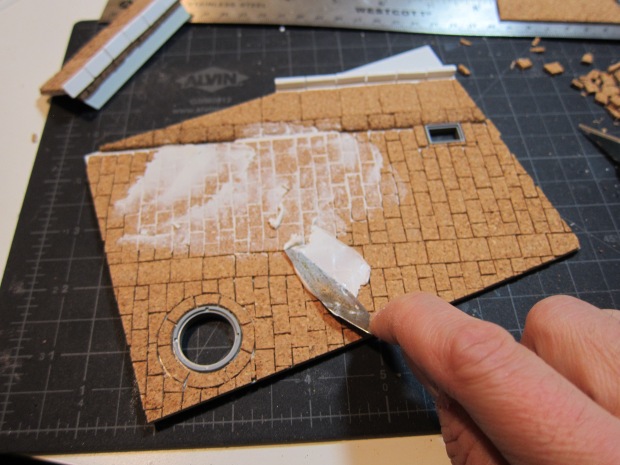